Contingency of the created Being I 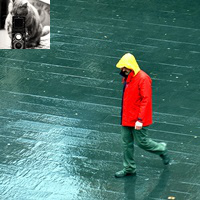 Aristotle’s metaphysics of Being always remained into the substance. In cosmology, Christian philosophers were indebted to Aristotle; but in natural theology, they maintained a strictly theological order and intention.

The radical innovation of Christian metaphysics was to consider God as the First. Christian Revelation proposed the believer a faith in a Creator God. This faith led to identify God as the absolute and subsistent Being, Being in essence, the First. For the believer, convinced that the world was created by God out of nothing, the horizon of understanding has radically changed: God is the First. St. Thomas, like Aristotle, speaks about the act; not the act of the form, of nature, of substance, but the act of Being or existence. Movement will no longer mean only local or substantial movement, but radical contingency of the existence itself.

The first principle – Plato, Aristotle – explains why the universe is what it is, but it does not explain why it is. But now, if God is the absolute Being, everything that it is not God owes its existence to Him. The multiplicity of both the appearances of Plato and the corruptible beings of Aristotle is nothing compared with the radical Christian contingency in the order of existence itself. Apparently, there is nothing as Greek as the first thomist way: First Mover, movements and movers, moved movers, but in the Greek universe everything is already given, the Being of movement flees from the causality of its First Mover.

In St. Thomas everything is different since, even if his argument repeats the same physical structure, it strives to prove in the order of Being. Aristotle’s causality is above a world which does not owe its existence to it; it is a starting point, beginning of movement, but not its creator.

But now, the Christian God which loves and not only attracts, orders or moves the world, is also creator of it. Aquinas seems to repeat Aristotle, but he does so in a completely new direction, since Greeks did not go beyond the event and only explained the cause of the exercise of causality.

Now, we get to the causality of Being and the order of existence itself. Being a metaphysical thought that consistently assumes the consequences of faith is the innovation of Christian philosophy. And the first consequence was that science of Being became science of the first cause, since God is First Cause and Being par excellence.

This affirmation about God was not in opposition to Greek philosophy; it does not seem to be a conflict between the Greek principles and the conclusions that Christians drew from them. It would be appropriate to say that there was religious novelty without philosophical opposition, so that Greeks did not know a few consequences already implicit in their own principles.