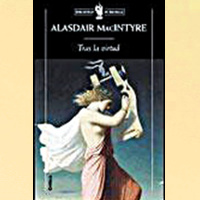 Alasdair Chalmers MacIntyre (born 1929) is a Scottish[1] philosopher primarily known for his contribution to moral and political philosophy but known also for his work in history of philosophy and theology.

He is Senior Research Fellow at the Centre for Contemporary Aristotelian Studies in Ethics and Politics (CASEP) at London Metropolitan University, and an Emeritus Professor of Philosophy at the University of Notre Dame. During his lengthy academic career, he also taught at Brandeis University, Duke University, Vanderbilt University, and Boston University. Macintyre's After Virtue (1981) is widely recognised as one of the most important works of Anglophone political philosophy in the 20th century.