Guardini tackles the text with single power of your own thinking and creative capacity. Hence the juiciness, freshness, and intensity of the reflections of this masterpiece 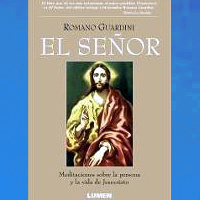 Romano Guardini was the son of Italian parents. He lived most of his life in Germany, where his father worked as a diplomat. Priest of the Catholic Church was ordered and was one of the leaders of the spiritual and intellectual movements that unleashed after the reforms approved by the Second Vatican Council.

"The Lord" collects some of his homilies, one that concerns the person and activity of Jesus. With illuminated by a supernatural instinct accurate words, behold the Lord looking Guardini, admire his willingness to receive him as Savior. That intention born naturally full of reflections and theological soundness, sketching attractive personality profiles of Jesus. "Romano Guardini intensely lived his priestly life and apostolic task that implies" So begins the splendid introduction of Alfonso Lopez Quintas.

The same reader will see that the book in your hands is an excellent testimony to such words. To get students to envision in a secular atmosphere, the fullness of life offered by Christianity, Guardini addressed in his Berlin university professor studying great figures of philosophical thought and literature: Plato, Augustine, Dante, and Pascal Dostoevsky, Hölderlin, Rilke and Mörike. Not trying to analyse their work as usual on the Philology of the time, but delve into the idea of man, in their approach to the great questions of existence. This hermeneutical task was to Guardini, an appeal to the creative work itself, in the manner indicated by Fichte to his disciples in the same Berlin University.

More than a work of exegesis of a certain thought, Guardini was searching on him an inspiration to catch up to the full meaning of Christian existence. Guardini reading addresses as suggestive authors directly, with the sole power of your own thinking and creative capacity. Hence the juiciness, freshness, intensity of his thoughts. Guardini sensed that every work of quality is a field in which the author responds creatively to the appeals of an aspect of reality. Consequently, supposed to interpret such works come into play with them, ie rebuild their basic experiences and actively assume the creative possibilities they offer us, to grasp the realities in their full meaning.