El criterio of Jaime Balmes, an assay to direct our understanding to knowledge of the truth. 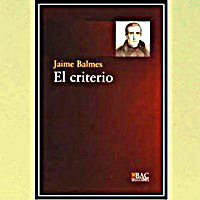 Balmes was born at Vic in Catalonia, Spain and baptized the same day in the cathedral of that city with the name of Jaime Luciano Antonio. He died in the same city. In 1817, Balmes began his studies at the seminary in Vic: three years of Latin grammar, three of Rhetoric and, from 1822, three of Philosophy.

In 1825, in Solsona, he received the tonsure from the Bishop of this city, Manuel Benito Tabernero. From 1825 to 1826, Balmes studied courses of Theology, also in Vic Seminary. He studied four courses of Theology, thanks to a scholarship, in the College of San Carlos in Cervera University.

For two years in 1830, because of the closure of Cervera University, Balmes continued studying in Vic on his own. On June 8, 1833 he received his degree in theology. On September 20, 1834, in the chapel of the episcopal palace of Vic, Balmes was ordained a priest by bishop Don Pablo de Jesus Corcuera. He continued his studies in theology and of Canons, again at the University of Cervera.

Finally, in 1835, he received the title of Doctor of Theology and Bachelor of Canons. Balmes then made several attempts to teach in an official way at the University of Barcelona and not get engaged for some time in Vich tutoring. Finally, the City Council appoints him, in 1837, Professor of Mathematics, a position he held for four years. In 1839 his mother Teresa Urpiá, died. Two years later, in 1841 he moved to Barcelona. In these years, Balmes began his creative activity and contributed to various newspapers and magazines: Peace, Catholic Madrid, Civilization; and several pamphlets that attract readers attention.

From 1841, his creative genius "exploded" and he developed in a few highly active months his writings and his personality, that would be admired throughout Europe. On September 7, 1844, he wrote and published a text called "The true idea of value, or thoughts on the origin, the nature and variations of the prices" in which he solved the value paradox, clearly introducing the notion of marginal use, Balmes asked himself "why a precious stone has a higher value than a piece of bread?"

Having attacked the regent Espartero, he was exiled. On his return, he founded and edited El Pensamiento de la Nación, a Catholic and conservative weekly; however, his fame rests principally on El Protestantismo comparado con el Catolicismo en sus relaciones con la Civilización Europea (Protestantism and Catholicity compared in their Effects on the Civilization of Europe),an able defence of Catholicism on the ground that it represents the spirit of obedience or order, as opposed to Protestantism, the spirit of revolt or anarchy.

The book is often cited as a counter argument to historical accounts that focus on the reputed central role of the Protestant thought to the development of modern society. According to the Encyclopædia Britannica Eleventh Edition: The best of his philosophical works, which are clear expositions of the scholastic system of thought, are the Filosofia Fundamental (Basic Philosophy),and the Curso de Filosofia Elemental (A Course of Elementary Philosophy), which he translated into Latin for use in seminaries.