Review: The Agony of Jesus 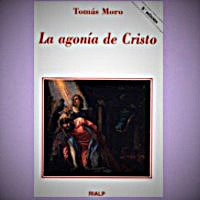 Sir Thomas More (7 February 1478 – 6 July 1535), known to Roman Catholics as Saint Thomas More, was an English lawyer, social philosopher, author, statesman and noted Renaissance humanist. He was an important councillor to Henry VIII and Lord Chancellor from October 1529 to 16 May 1532. More opposed the Protestant Reformation, in particular the theology of Martin Luther and William Tyndale, whose books he burned and whose followers he persecuted.

More also wrote Utopia, published in 1516, about the political system of an ideal and imaginary island nation. More later opposed the King's separation from the Catholic Church and refused to accept him as Supreme Head of the Church of England because it disparaged papal authority and he also opposed Henry's marriage to Anne Boleyn. Tried for treason, More was convicted likely due to perjured testimony and beheaded. Pope Pius XI canonised More in 1935 as a martyr of the schism that separated the Church of England from Rome; Pope John Paul II in 2000 declared More the "heavenly Patron of Statesmen and Politicians".

Since 1980, the Church of England has remembered More liturgically as a Reformation martyr. In 2002, he was placed at number 37 in the BBC's poll of the 100 Greatest Britons. In 1533, More refused to attend the coronation of Anne Boleyn as the Queen of England. Technically, this was not an act of treason, as More had written to Henry acknowledging Anne's queenship and expressing his desire for the King's happiness and the new Queen's health. Despite this, his refusal to attend was widely interpreted as a snub against Anne, and Henry took action against him. Shortly thereafter, More was charged with accepting bribes, but the charges had to be dismissed for lack of any evidence. In early 1534, More was accused of conspiring with the "Holy Maid of Kent," Elizabeth Barton, a nun who had prophesied against the king's annulment, but More was able to produce a letter in which he had instructed Barton not to interfere with state matters.[citation needed] On 13 April 1534, More was asked to appear before a commission and swear his allegiance to the parliamentary Act of Succession.

More accepted Parliament's right to declare Anne Boleyn the legitimate Queen of England, but he steadfastly refused to take the oath of supremacy of the Crown in the relationship between the kingdom and the church in England. Holding fast to the teaching of papal supremacy, More refused to take the oath and furthermore publicly refused to uphold Henry's annulment from Catherine. John Fisher, Bishop of Rochester, refused the oath along with More. The oath reads:[31] ...By reason whereof the Bishop of Rome and See Apostolic, contrary to the great and inviolable grants of jurisdictions given by God immediately to emperors, kings and princes in succession to their heirs, hath presumed in times past to invest who should please them to inherit in other men's kingdoms and dominions, which thing we your most humble subjects, both spiritual and temporal, do most abhor and detest... With his refusal to support the King's annulment, More's enemies had enough evidence to have the King arrest him on treason. Four days later, Henry had More imprisoned in the Tower of London.

There More prepared a devotional Dialogue of Comfort against Tribulation. While More was imprisoned in the Tower, Thomas Cromwell made several visits, urging More to take the oath, which More continued to refuse. Site of scaffold at Tower Hill where More was executed by decapitation Commemorative plaque at the site of the ancient scaffold at Tower Hill, with Sir Thomas More listed among other notables executed at the site. On 1 July 1535, More was tried before a panel of judges that included the new Lord Chancellor, Sir Thomas Audley, as well as Anne Boleyn's father, brother, and uncle. He was charged with high treason for denying the validity of the Act of Supremacy. More, relying on legal precedent and the maxim "qui tacet consentire videtur" (literally, who (is) silent is seen to consent), understood that he could not be convicted as long as he did not explicitly deny that the King was Supreme Head of the Church, and he therefore refused to answer all questions regarding his opinions on the subject. Thomas Cromwell, at the time the most powerful of the King's advisors, brought forth the Solicitor General, Richard Rich, to testify that More had, in his presence, denied that the King was the legitimate head of the church.

This testimony was extremely dubious: witnesses Richard Southwell and Mr. Palmer both denied having heard the details of the reported conversation, and as More himself pointed out: Can it therefore seem likely to your Lordships, that I should in so weighty an Affair as this, act so unadvisedly, as to trust Mr. Rich, a Man I had always so mean an Opinion of, in reference to his Truth and Honesty, ... that I should only impart to Mr. Rich the Secrets of my Conscience in respect to the King's Supremacy, the particular Secrets, and only Point about which I have been so long pressed to explain my self? which I never did, nor never would reveal; when the Act was once made, either to the King himself, or any of his Privy Councillors, as is well known to your Honours, who have been sent upon no other account at several times by his Majesty to me in the Tower. I refer it to your Judgments, my Lords, whether this can seem credible to any of your Lordships. However, the jury took only fifteen minutes to find More guilty. More was tried, and found guilty, under the following section of the Treason Act 1534: If any person or persons, after the first day of February next coming, do maliciously wish, will or desire, by words or writing, or by craft imagine, invent, practise, or attempt any bodily harm to be done or committed to the king's most royal person, the queen's, or their heirs apparent, or to deprive them or any of them of their dignity, title, or name of their royal estates ... That then every such person and persons so offending ... shall have and suffer such pains of death and other penalties, as is limited and accustomed in cases of high treason. After the jury's verdict was delivered and before his sentencing, More spoke freely of his belief that "no temporal man may be the head of the spirituality". He was sentenced to be hanged, drawn, and quartered (the usual punishment for traitors who were not the nobility), but the King commuted this to execution by decapitation. The execution took place on 6 July 1535. When he came to mount the steps to the scaffold, he is widely quoted as saying (to the officials): "I pray you, I pray you, Mr Lieutenant, see me safe up and for my coming down, I can shift for myself"; while on the scaffold he declared that he died "the king's good servant, but God's first.