The proofs of the existence of God 3 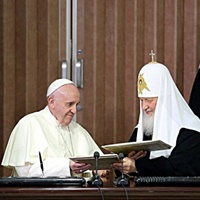 But we can not proceed towards infinite in the series of movers, for it would mean eliminating the First Mover, as well as all other movers and the last moved , when it is its movement what we are trying to explain. We must conclude, then, that God must be understood as First Unmoved Mover. Some authors have indicated that this way would culminate in a sort of soul of the world, but this would only happen if movement is treated in a physical mode, and not metaphysically as the way does.

The third way starts with the being of beings which are possible to being and to not-being, i.e., beings that, while existant in act, are indifferent for being and not-being. Such indifference is evident in their generation and corruption.

The starting point is, then, the finite being as something limited in duration. The being limited in duration – that is to say, contingent – is caused by a necessary being. If everything is possible of not-being, then nothing existed once, but this is not true since anything would exist now, then. Therefore, a necessary being must exist. It is not possible proceeding towards infinite in the series of those necessary beings which have the cause of their necessity in another one. It is not about the causes of movement now, like we saw in the first way; nor about the activity, like in the second one, but about the causes of being.

There is a being for itself, not subordinated to any other else, neither in the movement, in the causation nor in being. The being Necessary by itself doesn’t have existence, but it is its existence itself. It is the ipsum subsistens.

The fourth way focuses on participations or gadations. The starting point is the observation that certain perfections realised in diverse grades exist in things, like the essential or the especific ones. Those perfections not realised in grades must be excluded; furthermore, St. Thomas doesn’t take into account all perfections, but only those of truth, goodness and nobleness. In our experience, we find things with greater or lesser entity, unity, truth, etc.

The pure transcendental perfections wich appear participated in things are received by subjects, i.e., are effectuated and ,for this reason, caused by something external. A perfection is possessed in a greater or lesser degree in conformity with its proximity or remoteness from the source from which it comes. In short, limited perfections are always participated. And we can not proceed towards infinite, but rather to conclude in the existence of something Maximum in perfection. Only the Maximum entity is by essence, all other beings exist by participation. There exists then a Maximum entity which causes being, goodness and any other perfection of things, since in God we find the absolute identification of its existence and its essence.