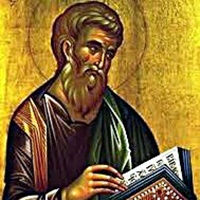 Irenaeus was born during the first half of the 2nd century (the exact date is disputed: between the years 115 and 125 according to some, or 130 and 142 according to others), and he is thought to have been a Greek from Polycarp's hometown of Smyrna in Asia Minor, now İzmir, Turkey.

Unlike many of his contemporaries, he was brought up in a Christian family rather than converting as an adult. During the persecution of Marcus Aurelius, the Roman Emperor from 161–180, Irenaeus was a priest of the Church of Lyon. The clergy of that city, many of whom were suffering imprisonment for the faith, sent him in 177 to Rome with a letter to Pope Eleuterus concerning the heresy Montanism, and that occasion bore emphatic testimony to his merits.

While Irenaeus was in Rome, a massacre took place in Lyon. Returning to Gaul, Irenaeus succeeded the martyr Saint Pothinus and became the second Bishop of Lyon. During the religious peace which followed the persecution of Marcus Aurelius, the new bishop divided his activities between the duties of a pastor and of a missionary (as to which we have but brief data, late and not very certain). Almost all his writings were directed against Gnosticism.

The most famous of these writings is Adversus haereses (Against Heresies). Irenaeus alludes to coming across Gnostic writings, and holding conversations with Gnostics, and this may have taken place in Asia Minor or in Rome. However, it also appears that Gnosticism was present near Lyon: he writes that there were followers of 'Magus the Magician' living and teaching in the Rhone valley.Little is known about the career of Irenaeus after he became bishop. The last action reported of him (by Eusebius, 150 years later) is that in 190 or 191, he exerted influence on Pope Victor I not to excommunicate the Christian communities of Asia Minor which persevered in the practice of the Quartodeciman celebration of Easte.

Nothing is known of the date of his death, which must have occurred at the end of the 2nd or the beginning of the 3rd century. The Roman Catholic Church and Orthodox Church celebrate him as a martyr. He was buried under the Church of Saint John in Lyon, which was later renamed St Irenaeus in his honour. The tomb and his remains were utterly destroyed in 1562 by the Huguenots.