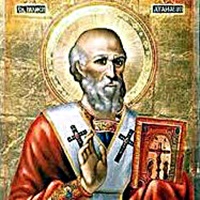 (...) One incident that happened during his service in Antioch illustrates the influence of his homilies. When Chrysostom arrived in Antioch, the bishop of the city had to intervene with Emperor Theodosius I on behalf of citizens who had gone on a rampage mutilating statues of the Emperor and his family. During the weeks of Lent in 387, John preached twenty-one homilies in which he entreated the people to see the error of their ways. These made a lasting impression on the general population of the city: many pagans converted to Christianity as a result of the homilies. As a result, Theodosius' vengeance was not as severe as it might have been In the autumn of 397,

John was appointed Archbishop of Constantinople, after having been nominated without his knowledge by the eunuch Eutropius. He had to leave Antioch in secret due to fears that the departure of such a popular figure would cause civil unrest. During his time as Archbishop he adamantly refused to host lavish social gatherings, which made him popular with the common people, but unpopular with wealthy citizens and the clergy. His reforms of the clergy were also unpopular with these groups. He told visiting regional preachers to return to the churches they were meant to be serving—without any payout.

His time in Constantinople was more tumultuous than his time in Antioch. Theophilus, the Patriarch of Alexandria, wanted to bring Constantinople under his sway and opposed John's appointment to Constantinople. Theophilus had disciplined four Egyptian monks (known as "the Tall Brothers") over their support of Origen's teachings. They fled to John and were welcomed by him. Theophilus therefore accused John of being too partial to the teaching of Origen.

He made another enemy in Aelia Eudoxia, the wife of the eastern Emperor Arcadius, who assumed (perhaps with justification) that his denunciations of extravagance in feminine dress were aimed at herself. Eudoxia, Theophilus and other of his enemies held a synod in 403 (the Synod of the Oak) to charge John, in which his connection to Origen was used against him. It resulted in his deposition and banishment. He was called back by Arcadius almost immediately, as the people became "tumultuous" over his departure.

There was also an earthquake the night of his arrest, which Eudoxia took for a sign of God's anger, prompting her to ask Arcadius for John's reinstatement. Peace was short-lived. A silver statue of Eudoxia was erected in the Augustaion, near his cathedral. John denounced the dedication ceremonies. He spoke against her in harsh terms: "Again Herodias raves; again she is troubled; she dances again; and again desires to receive John's head in a charger, an allusion to the events surrounding the death of John the Baptist. Once again he was banished, this time to the Caucasus in Abkhazia.

Around 405, Chrysostom began to lend moral and financial support to Christian monks who were enforcing the emperors' anti-Pagan laws, by destroying temples and shrines in Phoenicia and nearby regions.