Hello. I’m Joan Martínez Porcell. I welcome you to this virtual space
that I hope will not dissapoint you.

I’m a Catholic priest,
and philosopher and, sometimes, a poet.
But from now on, I would like to be your friend.

Review: Black legends of the Church 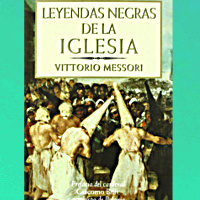 Vittorio Messori (b. 1941) is an Italian journalist and writer. He was born in Sassoulo near Modena in Italy. He graduated on the recognized lycee of Azeglio in Turin. He became a doctor of political sciences by his thesis on the radicals in the 19th century. At first, Messori was the editor and then the leader of the press office of a large publishing house.

For long years, he was the cronist of Stampa Sera, then the editor of the journal La Stampa and the weekly Tuttolibri. He is a profound explorer of the questions in Christianity and especially Catholicism. His very influential books were Jesus hypotheses (1977), Opus Dei (1996), The Ratzinger Report (1987). He also performed the first book-length interview with Pope John Paul II, published under the pope's authorship with the heading Crossing the Threshold of Hope (1994)

We need to realize once the accumulation of arbitrary opinions, substantial distortions and lies true that weigh on all that concerns the church historically. We are literally besieged by wickedness and deceit: Catholics mostly do not notice it, or will not.