Review: The Soul of The Apostolate 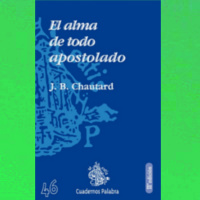 Dom Jean-Baptiste Chautard born March 12, 1858 in Briancon and died September 29, 1935 Monk as a monk. First, he was a monk at the Abbey of Our Lady Aiguebelle and later abbot of the Abbey of Sept-Fons from 1899-1935. Dom Jean-Baptiste Chautard wrote a famous book, "The soul of the apostolate" first published under the name of "the Apostolate of the interior life" and "Catechism" written on the boat that leads to Brazil.

This book, in its first version (1907) is for the religious of the Holy Family of the Sacred Heart, founded by his friend the Jesuit Luis Rabussier but in its complete form is intended for seminarians and priests. For almost fifty years was an essential classic French spirituality and its international influence was considerable. This book emphasizes the means to obtain and maintain union with God through prayer, the prayer of the heart, liturgical life, and denial.

Especially condemns the "heresy of action" that forgets the primacy of the interior life and the importance of spiritual life in the apostolate. The heresy of action (activism) or "Americanism" means a growing danger in some aspects of the new evangelization. In this age of relentless activity it is easy for Christians, particularly those involved in good works, to fall into the pattern of the activist. But mere activity and material results are not sufficient for a successful apostolate. In his classic work The Soul of the Apostolate,

"Heresy works! The feverish activity rather than the action of God; ignorance of grace; the pride of the man who seeks to dethrone Jesus; considering as mere abstractions, at least in practice, the supernatural life, the power of prayer and the Economy of Redemption, nothing imaginary cases are presented and, to varying degrees, an analysis of souls often accused in this century of naturalism in which man judges from appearances and work as if the success of his company depended mainly on what your organization ingenious. Even in the light of philosophy, regardless of revelation would pitied the man of worth who refused to acknowledge that all the talents that others admire him, has received from God. “(Soul of the apostolate n.15)

"If an apostolic man is believed able to produce trace of supernatural life, apart from Jesus, he shows a theological ignorance as supine as stupid sufficiency"