Hello. I’m Joan Martínez Porcell. I welcome you to this virtual space
that I hope will not dissapoint you.

I’m a Catholic priest,
and philosopher and, sometimes, a poet.
But from now on, I would like to be your friend.

Review: The Saints in Mercy

Story of a Soul: The Autobiography of Saint Therese of Lisieux 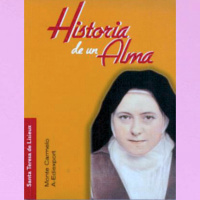 She is popularly known as "The Little Flower of Jesus" or simply, "The Little Flower". Thérèse has been a highly influential model of sanctity for Catholics and for others because of the "simplicity and practicality of her approach to the spiritual life". Together with St. Francis of Assisi, she is one of the most popular saints in the history of the church.[2][3][4] Pope Pius X called her "the greatest saint of modern times".

Thérèse felt an early call to religious life, and overcoming various obstacles, in 1888 at the early age of 15, she became a nun and joined two of her elder sisters in cloistered Carmelite community of Lisieux, Normandy. After nine years as a Carmelite religious, having fulfilled various offices such as sacristan and assistant to the novice mistress, and having spent her last eighteen months in Carmel in a night of faith, she died of tuberculosis at the age of 24. Her feast day is on October.

Thérèse is well known throughout the world, with the Basilica of Lisieux being the second largest place of pilgrimage in France after Lourdes. St. Thérèse is known today because of her spiritual memoir, L'histoire d'une âme (The Story of a Soul), which she wrote upon the orders of two prioresses of her monastery because of the many miracles worked at her intercession. She began to write Story of a Soul in 1895 as a memoir of her childhood, under instructions from her sister Pauline, known in religion as Mother Agnes of Jesus. Mother Agnes gave the order after being prompted by their eldest sister, Sister Marie of the Sacred Heart. While Thérèse was on retreat in September 1896, she wrote a letter to Sister Marie of the Sacred Heart which also forms part of what was later published as "Story of a Soul". In June 1897,

Mother Agnes became aware of the seriousness of Thérèse's illness. She immediately asked Mother Marie de Gonzague, who had succeeded her as prioress, to allow Thérèse to write another memoir with more details of her religious life. With selections from Therese's letters and poems and reminiscences of her by the other nuns, it was published posthumously. It was heavily edited by Pauline (Mother Agnes), who made more than seven thousand revisions to Therese's manuscript and presented it as a biography of her sister. Aside from considerations of style, Mother Marie de Gonzague had ordered Pauline to alter the first two sections of the manuscript to make them appear as if they were addressed to Mother Marie as well.

Saint Therese had written her autobiography under obedience. While on her deathbed the Saint made many references to the book's future appeal and benefit to souls. Since 1973, two centenary editions of Thérèse's original, unedited manuscripts, including The Story of a Soul, her letters, poems, prayers and the plays she wrote for the monastery recreations have been published in French. ICS Publications has issued a complete critical edition of her writings: Story of a Soul, Last Conversations, and the two volumes of her letters were translated by John Clarke, O.C.D.; The Poetry of Saint Thérèse by Donald Kinney, O.C.D.; The Prayers of St. Thérèse by Alethea Kane, O.C.D.; and The Religious Plays of St. Therese of Lisieux by David Dwyer and Susan Conroy.