Review: The Saints in Mercy 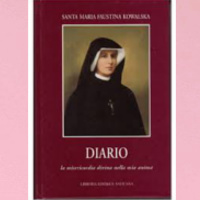 Throughout her life, Faustina reported having visions of Jesus and conversations with him, which she wrote about in her diary, later published as the book The Diary of Saint Maria Faustina Kowalska: Divine Mercy in My Soul. Her Vatican biography quotes some of these reputed conversations regarding the Divine Mercy devotion.[4] At age 20 she joined a convent in Warsaw and was later transferred to Płock and then to Vilnius where she met her confessor, Father Michał Sopoćko, who supported her devotion to the Divine Mercy.

Faustina and Sopoćko directed an artist to paint the first Divine Mercy image, based on Faustina's reported vision of Jesus. Sopoćko used the image to celebrate the first Mass on the first Sunday after Easter - which later was established by Pope John Paul II as Divine Mercy Sunday. Faustina was canonized as a saint by the Roman Catholic Church on 30 April 2000,having been considered a mystic and visionary.

She is known and venerated within the Church as the Apostle of Divine Mercy. She was born as Helena Kowalska, in Głogowiec, Łęczyca County, north-west of Łódź in Poland. She was the third of ten children of Stanisław Kowalski and Marianna Kowalska. Her father was a carpenter and a peasant and the family was poor and religious.She stated that she first felt a calling to the religious life while attending the Exposition of the Blessed Sacrament at age seven.She wanted to enter the convent after completing her time at school, but her parents would not give her permission. When she was sixteen years old, she went to work as a housekeeper in Lodz to support herself and help her parents In 1924, aged 19, Faustina and her sister Natalia went to a dance in a park in Łódź. Faustina said that while at the dance she had a vision of a suffering Jesus. She then went to the cathedral, where she says that she was told by Jesus to leave for Warsaw immediately and join a convent.

She packed a small bag that night and took a train for Warsaw (85 miles away) the next morning, without the permission of her parents and without knowing anyone in Warsaw. After she arrived, she entered the first church she saw (Saint James Church in Warsaw) and attended Mass. She asked the priest, Father Dąbrowski, for suggestions and he recommended staying with a Mrs. Lipszycowa, a local woman whom he considered trustworthy, until she found a convent. Faustina approached several convents in Warsaw, but was turned down every time, in one case being told "we do not accept maids here", referring to her poverty.

Faustina could read and write and had three or four years of education. After several weeks of searching, eventually the mother superior at the convent of Zgromadzenie Sióstr Matki Bożej Miłosierdzia (the Congregation of the Sisters of Our Lady of Mercy) decided to give her a chance and conditionally accepted her, provided she could pay for her religious habit. She knew nothing about the convent she was joining, except that she believed she was led there. In 1925, Faustina worked as a housemaid to save money, making deposits at the convent throughout the year, and finally gaining acceptance. On 30 April 1926, aged 20, she received her habit and took the religious name of Sister Maria Faustina of the Blessed Sacrament. The name Faustina, meaning "fortunate or blessed one", may have been intended as a feminine form of Faustinus, the name of two separate martyrs.

In April 1928, she took her first vows as a nun with her parents attending the profession rite. She was to be a nun for just over a decade, dying at the age of 33 on 5 October 1938. From February to April 1929, she was sent to the convent in Wilno (then in Poland, now Vilnius, Lithuania) as a cook. Although this was a short stay in Vilnius, she would return there later and meet Father Michael Sopoćko, who supported her mission. A year after her first return from Vilnius, in May 1930 she was transferred to the convent in Płock, Poland for close to two years Faustina arrived in Płock in May 1930. That year the first signs of her illness (which was later thought to be tuberculosis) appeared and she was sent to rest for several months in a nearby farm owned by her religious order. After recovery she returned to the convent and by February 1931 had been in the Płock area for about nine months.

Faustina wrote that on the night of Sunday, 22 February 1931, while she was in her cell in Płock, Jesus appeared to her as the "King of Divine Mercy" wearing a white garment with red and pale rays emanating from his heart. In her diary (Notebook I, items 47 and 48) she wrote that Jesus told her: Paint an image according to the pattern you see, with the signature: "Jesus, I trust in You" (in Polish: "Jezu, ufam Tobie"). I desire that this image be venerated, first in your chapel, and then throughout the world. I promise that the soul that will venerate this image will not perish. Not knowing how to paint, Faustina approached some other nuns at the convent in Płock for help, but received no assistance. Three years later, after her assignment to Vilnius, the first artistic rendering of the image was performed under her direction. In the same 22 February 1931 message about the Divine Mercy image, Faustina also wrote in her diary (Notebook I, item 49) that Jesus told her that he wanted the Divine Mercy image to be "solemnly blessed on the first Sunday after Easter; that Sunday is to be the Feast of Mercy."In November 1932, Faustina returned to Warsaw to prepare to take her final vows as a nun. On 1 May 1933 she took her final vows in Łagiewniki and became a perpetual sister of Our Lady of Mercy In late May 1933,

Faustina was transferred to Vilnius as the gardener, work that included growing vegetables. She remained in Vilnius for about three years until March 1936. The convent in Vilnius had only 18 sisters at the time and consisted of a few scattered small houses rather than a large building. Shortly after arriving in Vilnius, Faustina met Father Michael Sopoćko, the newly appointed confessor to the nuns. Sopoćko was also a professor of pastoral theology at Stefan Batory University (now called Vilnius University). When Faustina went to Sopoćko for her first confession, she told him that she had been conversing with Jesus, who had a plan for her. After some time, in 1933 Father Sopoćko insisted on a complete psychiatric evaluation of Faustina by Helena Maciejewska, a psychiatrist and a physician associated with the convent. Faustina passed the required tests and was declared of sound mind.

Thereafter, Sopoćko began to have confidence in Faustina and supported her efforts. Sopoćko also advised Faustina to begin writing a diary and to record the conversations and messages from Jesus which she was reporting.Faustina told Sopoćko about the Divine Mercy image and in January 1934 Sopoćko introduced her to the artist Eugene Kazimierowski who was also a professor at the university.By June 1934, Kazimierowski had finished painting the image based on the direction of Faustina and Father Sopoćko. That was the only Divine Mercy painting Faustina saw.[18] A superimposition of the face of Jesus in the Image of the Divine Mercy upon that in the already well-known Shroud of Turin shows great similarity.

On 13 September 1935, while still in Vilnius, Faustina wrote of a vision about the Chaplet of Divine Mercy in her diary (Notebook I item 476). The chaplet is about a third of the length of the Rosary. Faustina wrote that the purpose for chaplet's prayers for mercy are threefold: to obtain mercy, to trust in Christ's mercy, and to show mercy to others. In November 1935, Faustina wrote the rules for a new contemplative religious congregation devoted to the Divine Mercy. In December she visited a house in Vilnius which she said she had seen in a vision as the first convent for the congregation.In January 1936, Faustina went to see Archbishop Jałbrzykowski to discuss a new congregation for Divine Mercy. But he reminded her that she was perpetually vowed to her current order. In March 1936, Faustina told her superiors that she was thinking of leaving the order to start a new one specifically devoted to Divine Mercy, but she was transferred to Walendów, southwest of Warsaw.She reported that Jesus had said to her: "My Daughter, do whatever is within your power to spread devotion to My Divine Mercy, I will make up for what you lack. In 1936, Father Sopoćko wrote the first brochure on the Divine Mercy devotion and Archbishop Jałbrzykowski provided his imprimatur for it. The brochure carried the Divine Mercy image on the cover. Sopocko sent copies of the brochure to Faustina in Warsaw.

Faustina's chapel at her resting place, the Basilica of Divine Mercy in Kraków, Łagiewniki. Later in 1936, Faustina became ill, since speculated to be tuberculosis. She was moved to the sanatorium in Prądnik, Kraków. She continued to spend much time in prayer, reciting the chaplet and praying for the conversion of sinners. The last two years of her life were spent praying and keeping her diary.On 23 March 1937, Faustina wrote in her diary (Notebook III, item 1044) that she had a vision that the feast of the Divine Mercy would be celebrated in her local chapel and would be attended by large crowds and also that the same celebration would be held in Rome attended by the Pope.In July 1937 the first holy cards with the Divine Mercy image were printed. In August, Father Sopoćko asked Faustina to write the instructions for the Novena of Divine Mercy which she had reported as a message from Jesus on Good Friday 1937 Throughout 1937 progress was made in promoting the Divine Mercy and in November 1937 a pamphlet was published with the title Christ, King of Mercy. The pamphlet included the chaplet, the novena, and the litany of the Divine Mercy and the Divine Mercy image appeared on the cover, with the signature, "Jesus I Trust in You". On 10 November 1937, Mother Irene, Faustina's superior, showed her the booklets while Faustina rested in her bed.

As her health deteriorated at the end of 1937, Faustina's reported visions intensified, and she was said to be looking forward to an end to her life. In April 1938, her illness had progressed and she was sent to rest in the sanatorium in Prądnik for what was to be her final stay there.[29] In September 1938, Father Sopoćko visited her at the sanatorium and found her very ill but in ecstasy as she was praying. Later in the month she was taken back home to Kraków to await her death there. Father Sopoćko visited her at the convent for the last time on 26 September 1938. Faustina died at the age of 33 on 5 October 1938. She was buried on 7 October and now rests at the Basilica of Divine Mercy in Kraków, Poland.